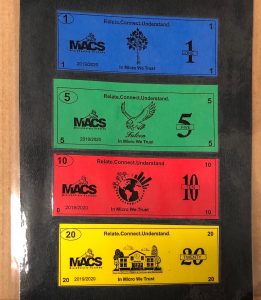 After four and a half years of having the same Micro Bucks, the Micro City Bank decided it was time to make a change! Similar to how the US government updates the appearance of bills and coins, the students thought the currency at MACS could use some new designs. Aiden, a seventh grade student and bank employee designed the new bills based on the opinions of all citizens. After an intensive voting process, students decided on a school house ($20 bill), a diversity and community symbol ($10 bill), a falcon ($5 bill), and a white birch tree ($1 bill). The bank is now in the process of removing the old money and circulating the new and improved currency!